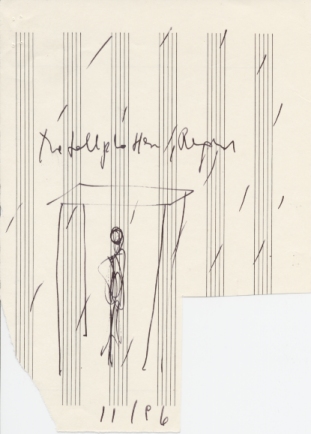 Weiss/Weisslich 31a is the project of rain shelters in public places. The roofs of the shelters are of differently resonant materials.

Usually one shelter creates one pitch, and sequences of shelters produce melodies or tonal fields while you hop from one shelter to the other in order not to become too wet in between. But there exist also versions with encased metal roofs, producing different pitches, similar to steel drums.

can be seen also as a reference piece. But it is also possible to make a temporary installation: put a drum-set in the rain. (If you use a cheap drum-set with plastic skins, it will survive).

this piece exists only in its title, and is dedicated to the rain, producing different pitches within the different segments of an opened umbrella - but also dedicated to Erik Satie who never left his home without an umbrella

Glasses, as another kind of membrane, set in the rain. In one version from 2002 glascymbals (verrophone) were put into the rain and recorded on CD. 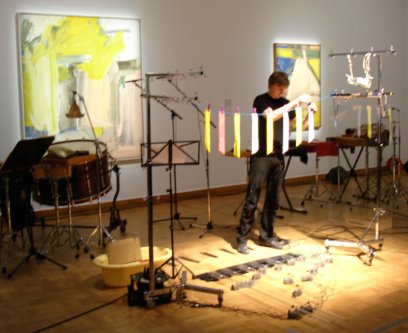 
The rain has been an almost regularly recurring source of inspiration in Peter Ablinger's music. Here are a few more rain pieces:

reference pieces
pieces which exist only in its title; one can execute or visite, do or think them