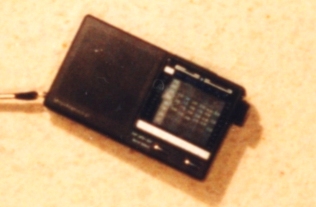 How to perform the piece:

The piece is a performance with 12 small analog radios (the cheapest kind of radios, where the noise between stations is not surpressed, so-called world-receivers). The radios are loaded with batteries and tuned between two stations where they receive only static white noise.

The piece is best for a space where the performer can easily surround the audience in a regular circle. The performer uses a rucksack or a suitable bag (not plastic) for the radios when entering the performance space. He starts in front of the audience, takes the first radio out of the bag, turns it on (white noise) and lays it on the ground (or on another prepared position, a chair, a note-stand, etc.). Then he goes to position 2 and does the same with the second radio. There are 12 positions in regulare distance creating a circle that surrounds the audience.

After having switched on the last radio, dont wait, just go on in the same tempo as before, go to the next position - whitch is again position 1 - pick up the radio, switch it off, and put it back into the bag. Then go on to position 2 and do the same with radio 2. And so on: walk a complete second circle which ends at position 12 where you switch off the last radio. End.


Note-book entries for "Circle" and "Line"


you can also order the radios at the publisher: