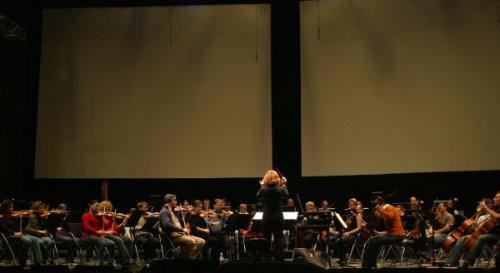 Several of the "phonographs" of the 1st act play a leading role in the 2nd act (as well as the 7th, see below), The Orchestra, here performed by the recreation Orchestra Graz in the Helmut List Hall- a work itself in ten tableaux and eleven intermezzi.

catchwords by Peter Ablinger for
2nd Act (the Orchestra):


As elementary building blocks for the entire compositional architecture, certain sequences from the 1st act, the city-sound archive (as topoi of urban landscapes), become the stereophonic surroundings of the orchestra, which in sound-images follow this particular musical/topographical surveying of the city.

A space-sound-composition in 10 tableaus and 11 intermezzi, a concert for 60 instrumentalists, and electronics - a 'phonography' with the recreation Orchestra Graz under the musical direction of Sian Edwards. Text: Wolfgang Hofer, translated by Bill Dietz


detail from the score: THE ORCHESTRA, Intermezzo 8, Rainpiece
pdf-file, 243KB